Numbercaste: Introspecting on the process of writing a novel

Today I uploaded Numbercaste to Amazon – both print and Kindle versions.  I did the muckwork – formatting, cover, bleed, trim, selected paper, studied bestsellers in my genre, selected keywords –  and I very carefully saved it and logged off so that I can send everything live at the end of this month.

Numbercaste represents two years of work – two very interesting years that have changed me a great deal. I remember when I had the idea behind it. I usually scribble my ideas down and forget them later, but this one stuck. At some point I remember is sitting in a car, telling Enosh Praveen (then my boss at Readme.lk) “I’m writing a book.”

Two years, five drafts, and many new experiences later, here we are. Numbercaste and I have made it to Huffpost. Everything’s ready.

It’s interesting to look back and see how far I’ve come. 2015. I was 23. I had read David Egger’s the Circle and figured I had a lot to add to the conversation. All I had to do, I reasoned, was sit there and crank out a thousand words a week. It could be done.

I could write, I knew that. I had a long history as Icaruswept, the political blogge; I had a shorter, but far more prolific journey as a tech journalist.

But  I hadn’t published any fiction worth speaking of. I’d scribbled, of course: a few poems, written a few short stories, and many years prior written the script to an indie RPG I was building with my best friends. Going further back, I wrote a novel when I was fifteen: a 132,000 word monster called the Waste that I can’t make head or tail of now. None of these saw the light of day.

I started in the only way I knew how: I wrote about a journalist who drives up and interviews Julius Common, the reclusive, all-powerful CEO of NumberCorp. Except it wasn’t called NumberCorp back then; it was called Society. The reporter was doing a Life-and-Lies kind of piece, kind of like Walter Isaacson (I had also recently read the Steve Jobs biography, which may have played a part in this choice).

Twenty pages in I had run out of things to say. I was stumped. I was used to writing blogposts and feature pieces. A 2000-3000 word piece is a sprint; a book is a marathon.

I tried again, this time from a different angle. Four characters, I thought. One, a disabled (yes, when you lose your legs, you’ve got less stock functionality than the average human being) software engineer. The other the journalist. The other someone close to the CEO, perhaps a top exec, or a PR person, who could shed light on the lies that were told. The other a bum, a hobo who lived off the grid and remembered things the way it used to be.

There was this place I used to walk at, in Ragama – a highway construction project left abandoned. Paddy fields, open sky, and a ridiculously wide dirt road that led nowhere. I’d walk back and forth and write bits and pieces in my head, then return to my computer and put it together.

That failed miserably. I could barely handle one main character, let alone four.

And then I had a perspective shift. I left Readme, and started working for what many call the Google of Sri Lanka – WSO2. It’s probably the country’s sexiest place to work at if you’re a techie. As journalists we used to attend events they hosted and go ‘whoa’.

When I started working there, I saw it from the other side of the coin. The work that went into making people go ‘whoa’. The people who did that work. The personalities and the possibilities and the clashes in a company like that. I looked at that journalist character and thought, what if that’s the journey? Watching Society grow from the inside?

This time I hit a vein I could explore. Writing mostly after work – I’d stay at office to avoid the post-work traffic – I clocked in a thousand words this week, a couple of thousand words next week, and so on. I wrote first in Google Docs, then in Word, then Scrivener, then in a code editor called Atom that I’d configured so my chapters would sync seamlessly as text files in Google Drive. I told myself the book would be done by December 2016.

The first draft was over 75,000 words and was completed in November. Spot on. [1] Facebook cheered me on.

Two voices on my feeds, though, urged me not to publish, but to keep my head down and polish it.

The first was CD Athuraliya, a machine learning expert and colleague (both at WSO2 and now at Lirneasia) whose input I’ve listened to ever since I met the guy. The other was Nayomi Munaweera ( Island of a Thousand Mirrors | What Lies Between Us ).

Nayomi is a fantastic wordsmith, probably one of the most talented Sri Lankans to put pen to paper, and she advised me to take some time off, come back to the book with fresh eyes. Then, she said, you’ll see what you need to revise.

So I did. And I went back. And my god, there were good bits, but also terrible bits. As Neil Gaiman says, the first draft is you just telling the story to yourself. Just like this blogpost is mostly me telling this story to myself.

What have I learned?

Firstly, that the life of an author, or a novelist, or indeed a journalist, is not the coffee-and-cigarettes glamor that everyone seems to think it is.

It’s day after day of going home, taking a shower, and dragging yourself to the cold light of the computer. Writing, to me, is something between science and art: a craft, if you will. I have to put in the hours, work my way through the sentences. There are bits of science to this – this way of structuring a plot, that way of blending narration – and there are moments of pure art, where the keyboard goes wild. 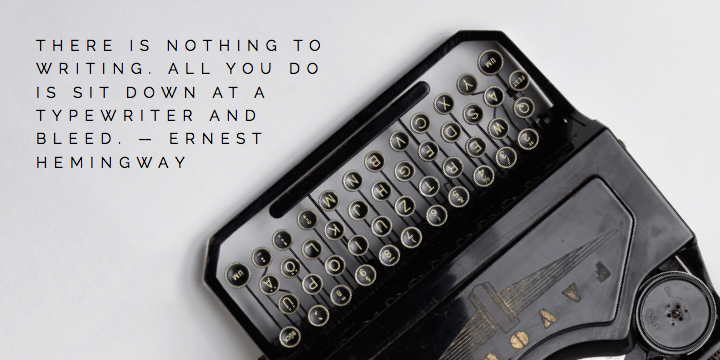 Anyone who says writing is hard work should work a few days in a mine somewhere swinging a pickaxe. Seriously, if you have to sit down at the typewriter and bleed, call the hospital and never go near the damn thing again. But nor is it play: there is a zone in between.

Fuck off with those Hemmingway posts. Hemmingway famously wrote standing up and never used a typewriter.

Thirdly, and most importantly, this doesn’t stop here. As I wrote I unlocked something I thought I’d lost as a child: a dreamer’s mind. In school, I used to fill entire notebooks with doodles and long stories of strange worlds. I stopped doing that shortly after I started writing for a living: I think there’s only so many words in you per day. I got that back. The things that inspired me as a child – Ken Levine’s Bioshock, the stories of Ray Bradbury, Alice in Wonderland – started feeling fresh again. Something took away the jadedness.

And that was amazing. I’m forever going to be thankful to Numbercaste for that.

I thought Numbercaste would be my debut, to be honest: instead, that honor went to The Slow Sad Suicide of Rohan Wijeratne, which was surprisingly well-received.

Looking back, as I proofread Numbercaste, I’m not surprised. Rohan – in style, in tone – took two years of lessons from Numbercaste. It’s sleeker, faster, more powerful, far more surreal, and I’ll probably never forget the day it hit #1 in both Scifi and Lit-fic on Amazon. But Numbercaste is more important to me, because it is a milestone of change.

[1] I’ve always had this weird phrase ‘the Soul is in the Software’ running in my head: graffiti from a scene in Cyborg 2, an altogether terrible movie whose only saving grace was Angelina Jolie naked.

1 thought on “Numbercaste: Introspecting on the process of writing a novel”

previousHuntington’s Civilizations: A Classification
nextThree fabulous works of science fiction that you should experience